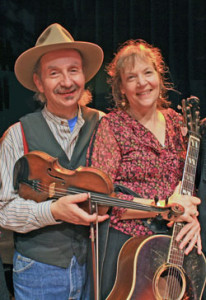 He was a Bronx kid. She grew up in Washington State. He was raised on pop music of the 1940s and ’50s. She had a fondness for traditional fiddle music and ’30s and ’40s popular tunes. He hung out in Greenwich Village coffeehouses and roamed North Carolina and Tennessee in search of traditional players. She played clubs and colleges on the West Coast and took a liking to the jazzy sound of the Swing Era. Since joining forces—both artistically and romantically (the two would marry in 1991)—Jay Ungar and Molly Mason have become one of the most celebrated duos on the American acoustic music scene.