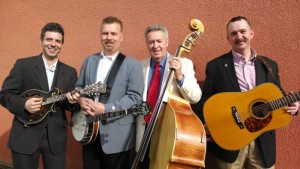 The Lost and Found Band was formed in 1973. The original lineup of the band consisted of bass player Allen Mills, banjo player Gene Parker, mandolin player Dempsey Young and guitarist Roger Handy. The band became quite popular playing bluegrass festivals, with Mills’ exceptional songwriting contributing much to the group’s fame; “Love of the Mountains,” recorded by the original lineup, has become a bluegrass standard.  In addition to contemporary songs, the band also recorded more traditional fare, such as “The Man Who Wrote ‘Home Sweet Home, Never Was a Married Man.” Most of their albums feature similar material, and the band continues to be a strong positive force in contemporary bluegrass music. The band first recorded for Outlet Records in 1975, then achieved wider fame after it signed with Roanoke’s Rebel Records in 1982.  By the mid-’90s, only Allen Mills and  DempseyYoung had stayed, recruiting guitarist Berry Berrier and banjo player Lynwood Lunsford as replacements. Throughout the years, Lost and Found has had many talented members of the band, including Ronnie Bowman, Shane Bartley, Greg Luck, Jody King, Ben Green along with others.  As of today, the band is  made up of Allen Mills on bass, Dan Wells on Guitar, Ronald Smith on banjo and Scott Napier on Mandolin.