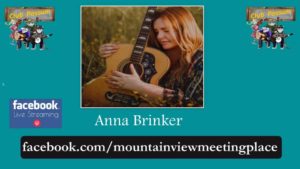 We are pleased to have Anna Brinker performing. Anna Brinker, local homegrown Country Music singer, songwriter, and musician. Anna has been singing since she was a young girl and picked up a guitar and began playing at the age of 13. Anna has played several venues across the State of Arkansas. She really began her solo acoustic act after opening for Country Music Superstar Jeff Bates in Searcy in 2013. Her first single, The Possum, which was written by her Father, Husband, and herself, was recorded and set for release in mid-August. She has such a great line up of original songs written by her and her Dad and is so eager to get them recorded and released to the public. With the talent that this amazing performer holds, she is bound for stardom.

Catch this show live at the Mountain View Meeting Place or the live broadcast on the
MV Meeting Place Facebook channel or at the website
www.mvmeetingplace.com/club-possum.