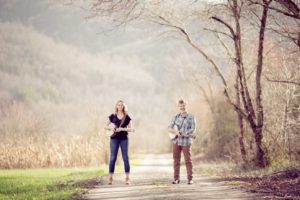 Join Frank & Allie, core duo of longstanding string band The Freight Hoppers, for a free show at Mountain View Meeting Place. Banjos, guitars, folk songs, and mountain music are in store for you. Plus check out their selection of hand-made screenprinted t-shirts and CDs!

ABOUT FRANK & ALLIE
Frank Lee and Allie Burbrink (Bryson City, NC) are a harmony-powered old time duo. Their April 2018 release, Roll On, Clouds, showcases their favorite songs from over two years of performing together. These pieces range from blues tradition (“Somebody On Your Bond,” “Roll and Tumble”) to bluegrass classics (“Standing on a Mountain,” “Cabin on a Hill”), yet remain rooted in the old time aesthetic. Frank’s nylon string fretless banjo is the dominant instrument, with guitar, slide guitar, and Allie’s banjo and harmonica adding to the musical texture. Recording engineer Bruce Lang supplies upright bass on several tracks.

Frank and Allie, core duo of longstanding string band The Freight Hoppers, have traveled extensively as touring musicians. Frank, a founding member of The Freight Hoppers, has impressed audiences all over the United States, Canada, and northern Europe with his signature clawhammer sound. Allie is a founding member of The Whipstitch Sallies, a band from Indiana that toured in the Midwest, North Carolina, Colorado, and Hawaii. Together, the pair is a powerhouse duo with appearances planned across the country, and they toured France for two weeks in May 2018.

In addition to performing, Frank and Allie screen print music-themed t-shirts, available on their website. They also organize an old time music retreat in the Great Smoky Mountains in late March called the Banjo-Fiddle Frolic.