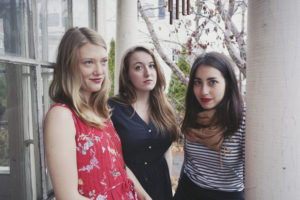 Lula Wiles is a band deeply rooted in traditional folk music, but equally deep is their devotion to modern songcraft. Their songs span from heartbreak-drenched acoustic ballads to honky-tonk swagger to contemporary grit and back again, all anchored by powerful three-part vocal harmonies. Their lyrics are fiercely honest, littered with reinvented folk tropes and evocative images – a rainy field of daisies, a dusty bar lit by Christmas lights, an unmade bed. They deliver love songs that are at once defiant and heartsick, as well as new contributions to the folk ballad canon and timely explorations of what it means to live in America today. Drawing from the deep wells of traditional old-time music, classic country, and contemporary indie-folk-rock songwriting and arranging, Lula Wiles melds diverse influences to create a sound all their own. The three band members deftly swap instruments and frontwoman duties, with Ellie Buckland (vocals/guitar/fiddle), Isa Burke (vocals/guitar/fiddle), and Mali Obomsawin (vocals/bass) each contributing their own singularly expressive vocals, instrumental lines, and songwriting. Onstage, the band gathers tightly around a single microphone for a spirited and emotionally resonant live show.