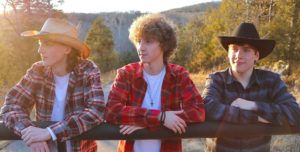 We’re so excited to have these very talented young men back with us again this year! These set of triplets put on such a great show…..you don’t want to miss it! Wear you dancing shoes because these guys perform Country and Classic Rock and dancing is allowed!!! We sure hope to see you at the Stage!

Outlaw country with a touch of Memphis blues, Kentucky bluegrass, and Southern rock combined with killer family harmony is the most apt description for eighteen-year-old triplet brothers Treyson, JD, and Chaz Stafford. Their band, TRIPPP, has gained a strong following in Arkansas and is poised to move on to bigger things with the recent release of their debut single “Can’t Do the Time” and the upcoming release of their self-titled debut EP – TRIPPP.

This young band of brothers hails from the small town of Jonesboro in the Northeast corner of Arkansas where the hills of Crowley’s Ridge meet the cotton and rice fields of the Mississippi River Delta. They picked up the fiddle at the age of six, but quickly moved on to other instruments by age eight. JD chose percussion and is a rare singing drummer, while also handling the roles of lead songwriter and lead singer on most of the band’s original songs. Chaz’s decade of guitar playing across multiple genres is evident in the skill he possesses for someone so young. He has a unique ear for arranging harmonies and composing the music for the words penned by his brothers. Treyson is the key entertainer in the trio, playing bass guitar, a stand up bass he lovingly calls “Bertha,” and a King stand up named “Bessie.”