Kelly Mulhollan, born in Fayetteville, Arkansas, was a ukulele fiend by the age of nine and quickly graduated to the guitar a year later, followed by the banjo. He was drawn to music like a magnet and he seemed to be able to find his way around any stringed instrument he laid his hands on. He dabbled in classical guitar from his teens and into college but it never really took hold. It did however instill a profound knowledge and appreciation of that art form which continues to be a strong influence on him today. A veteran of countless bands, the 1970’s found Kelly playing rock & roll, bluegrass, jazz, progressive rock and folk music. His musical taste always drifted towards the eclectic and pushed him further and further from the mainstream. 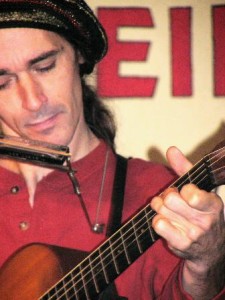