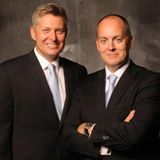 In a 2012 Washington Post interview, Del McCoury said, “…when I hear someone like The Gibson Brothers, I know it’s them from the first note.  They have that little thing in their voices that no one else has…”  And from Bluegrass Unlimited: “The brothers and the band have it all — lead vocals, brother-duet harmony, instrumental virtuosity, ensemble sensibilities and great original material.”  That’s the buzz. Here are the facts: 2013 IBMA Entertainers of the Year, Vocal Group of the Year, Song of the Year (“They Called It Music”) and Songwriter of the Year (Eric Gibson). 2012 IBMA Entertainers of the Year and Gospel Recorded Performance for “Singing As We Rise;” 2011 IBMA Vocal Group of the Year and Album of the Year for Help My Brother, also named 2011 Album of the year by PopMatters; and, 2010 IBMA Awards for Song of the Year and Gospel Recorded Performance of the Year for “Ring the Bell.”