Celebrating their 35th anniversary in September, 2014, Hickory Hill has proven to be one of Texas’ most popular and enduring acoustic groups. Through the years, the band has won considerable recognition, winning third place in the “Best New Band” contest at the Bluegrass Festival of the United States in Louisville, KY in 1981, and being nominated by SPBGMA as “Entertaining Bluegrass Band of the Year” in 1985 and “Bluegrass Band of the Year, Contemporary” in 1986. In 1993, Hickory Hill was named “Band Of The Year” by the Arts and Entertainment Committee of East Texas, and in 1996 was selected for a showcase performance at the International Bluegrass Music Association’s annual World of Bluegrass in Owensboro, Kentucky. Hickory Hill has been the host band of the Overton Bluegrass Music Festival since the festival’s inception in 1989. 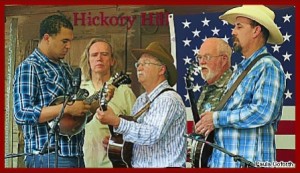