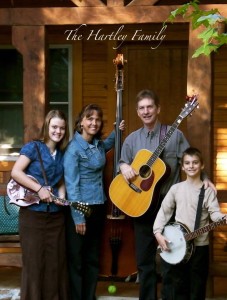 The Hartley Family started learning to play bluegrass and gospel music in 2003, just wanting to do something together as a family. A year later, to their surprise, they started getting invitations to play at churches, festivals, and other events. By 2007 they were traveling to places as far away as upstate New York, sharing their songs and meeting many kind people. Wherever they went, their goals were to (1) Honor God, (2) Bring joy to people, and (3) encourage others. In 2012, Anna, Josiah, and Daniel moved away from home and were too busy to make it to shows, leaving their dad, mom and the two youngest kids-Abby and Micah. It was a change that was hard to get used to. After deciding that our band was done, we kept getting some calls to come play, so the four left started practicing again. Now they are just doing local shows, but are open to what ever the Lord has planned for them. Although the band has changed a lot from what it was for 8 years, their goals remain the same. Tom(banjo/guitar/vocals), Deb(bass/vocals), Abby(vocals/guitar/mandolin/fiddle), Micah(banjo/fiddle/mandolin/vocals).