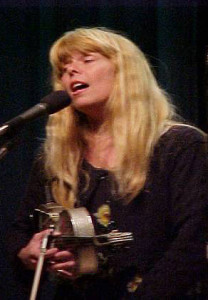 Donna Stjerna grew up in New York and California and began playing the fiddle with her dad in the family kitchen at age 12. He took her to see Country Western star Eddie Arnold sing the “Cattle Call” back then and there was a female ‘fiddler’ in the show. At that moment, Donna knew she too wanted to be up on the stage. She began playing in honky-tonks in her early teens and toured the country with her dad, fiddling at night and helping him paint signs during the day. Donna joined a country show band at 19 and played the Reno/Vegas circuit for many years. It was there that she learned the art of showmanship and giving 100% of herself to the audience. She still embraces that philosophy today.